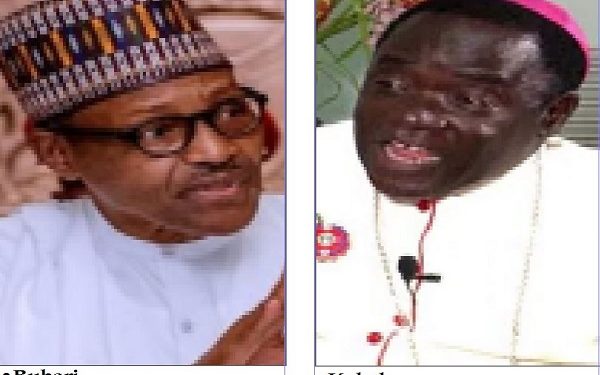 The Federal Government hit back at the Catholic Bishop of Sokoto Diocese, Dr.Matthew Kukah on Saturday for suggesting that there would have been a military coup or a war in the country if a non-Northern Muslim leader had practised a fraction of the alleged nepotism indulged in by President Muhammadu Buhari.

Information and Culture Minister Lai Mohammed said the statement did not only smack of instigating regime change outside the ballot box but also an open call to anarchy.

Although the minister mentioned no name in his statement, it was clear he was responding to the issues raised by Kukah in his Christmas message released on Friday.

Several groups and individuals joined the fray on Saturday, some supporting Kukah and others speaking in favour of the President.

The opposition Peoples Democratic Party (PDP) believes that Kukah did not say anything new, and asked the ruling All Progressives Congress (APC) to take the criticism as a wake-up call.

Mohammed, in his statement on Saturday, asked religious leaders in the country to “refrain from stoking the embers of hatred and disunity.”

He warned that “resorting to scorched-earth rhetoric at this time could trigger unintended consequences.”

He said while religious leaders have a responsibility to speak truth to power, such truth must not come “wrapped in anger, hatred, disunity and religious disharmony.”

He added: “It is particularly graceless and impious for any religious leader to use the period of Christmas, which is a season of peace, to stoke the embers of hatred, sectarian strife and national disunity.

”Calling for a violent overthrow of a democratically-elected government, no matter how disguised such a call is, and casting a particular religion as violent is not what any religious leader should engage in, and certainly not in a season of peace.

“Instigating regime change outside the ballot box is not only unconstitutional but also an open call to anarchy.

“While some religious leaders, being human, may not be able to disguise their national leadership preference, they should refrain from stigmatising the leader they have never supported anyway, using well-worn and disproved allegations of nepotism or whatever.”

The minister said whatever challenges Nigeria may be going through at this moment can only be tackled when all leaders and indeed all Nigerians come together; not when some people “arrogantly” engage in name-calling and finger-pointing.

The Buhari Media Organisation (BMO) expressed disappointment at Kukah’s allegation of nepotism against the President and condemned what it described as his subtle call for a coup in the country.

The group in a statement signed by its Chairman Niyi Akinsiju and Secretary Cassidy Madueke, noted that this was not the first time the Catholic Bishop had used the pulpit to sow division and discord and fuel an agenda of anarchy.

It said: “We condemn the remarks of Bishop Kukah where he made claims that the President was creating a Northern hegemony and that such could have been the reason for a coup.

“These comments are false, unreasonable and evil. They are anti-Nigeria and have no place in the kind of conversations Nigerians deserve to hear at a time that all are longing for peace and love.

“Time after time, the President Buhari administration has responded with clear facts, numbers and statistics on this allegation of nepotism, showing that in fact, the South-West has the most appointees in the government, while the South has more appointees than the North.

“Yet, no one has produced evidence to the contrary.

]“He has used the pulpit where the messages of peace, of joy, of solidarity, of unity and love should be heard to rather preach messages of discord, disunity, anarchy, fear and worse, to tell blatant lies against the President.

“A man who prides himself as a Bishop of the Church should not be the kind of person that these untruths should be heard from.”

In the view of the Peoples Democratic Party (PDP), Kukah said nothing new and should not be crucified for saying the obvious.

Spokesman for the PDP, Kola Ologbondiyan, said President Buhari and the APC should face reality, do some self-examination and mend their ways.

“Bishop Kukah simply said the truth as it is. If Alhaji Lai Mohammed is unaware, he should visit the streets of Ikeja, Lagos; Ibrahim Taiwo Road, Ilorin; Bauchi Road, Jos and ask the opinions of ordinary Nigerians,” said Kola Ologbondiyan, National Publicity Secretary of the PDP.

He added: “The APC and the Buhari Presidency have stigmatised themselves before Nigerians, having failed wholesomely on all electoral promises made since 2015.

“Buhari and his APC should quit living in denial because Nigerians have had enough of that.”

Contacted on Saturday for his response on the controversy, the President, Pharmaceutical Society of Nigeria (PSN) Mazi Sam Ohuabunwa, said instead of dwelling on the emotional aspect of Kukah’s comment, government should acknowledge the facts in his statement.

According to him, the President as the Chief Security Officer of the country should, at all times, take responsibility for all government actions or inactions.

His words: “When you keep your subordinate on the job, it means you are satisfied with their performance.

“If they are not pleasing you, you ought to change them. With the service chiefs still in office, the President should tell us what we are not seeing.

“What Kukah said about security is the obvious. But his position about military taking over if Buhari had not been a Northern Muslim is another issue entirely.

“I don’t support forceful takeover of government or any call for such. I think it is just the way the Father put it. He probably said it in a way that could be misinterpreted.

“I know him as a democrat and he fought against military rule too. It is a matter of interpretations. I say it depends on the frame of mind of the individual.

“The worst civilian rule is better than the best military government.

“And to say it is because he is a northern Muslim, I say not really. Jonathan is a Christian southerner and the same security situation occurred under him, and so much said here and there. But the military didn’t take over.

“I think Kukah just expressed his frustration in a way open to misinterpretation. He didn’t mean to incite any take- over.

“If Nigerians are tired of the government, the change must come about democratically the same way we elected them.”

‘We should not vilify Kukah’

A former governorship aspirant on the platform of the People’s Democratic Party (PDP) in Osun State, Dr Ayoade Adewopo, opined that Father Kukah merely expressed the current mood of the country in his statement.

Adewopo asked the President to address the issues raised and not vilify the messenger.

He did not share government’s view that the clergy wanted or intended that the military should take over the government.

He said: “The docility of the military in the midst of so much insecurity and nationwide outcry is disappointing.

“And let me say this: the docility of the military today about the lamentations around them is not about Buhari’s tribe or religion; it is largely about the fact that he is one of them, a General.

“They say once a soldier, always a soldier. Irrespective of party affiliations, Nigerians, not Kukah alone, have been lamenting and yet nothing is being done.”

Hassan: Govt should not respond to frivolities

Alwan Hassan, a chieftain of the ruling All Progressives Congress (APC), said government should not be responding to what he called frivolities.

He said Kukah’s statement and claims were in bad taste and dismissed government’s response as equally lacking in substance.

He said: “Government shouldn’t respond to everything. It is not the way to go. Instead, let us have what they are doing or want to do to address the issues affecting the country.

“I see Kukah’s statement as a badly delivered attempt to sell a northern Christian presidency. It was badly done and quite divisive.

“It is sad that such a respected person will be fuelling division between northern Christians and Muslims. That is not what we need at a time like this.

“However, I want to concern myself with the government and the Presidency. It is time to ignore some things and spend the time coming up with good deals for the people.

“It is when you lack things to tell the people that you become a defensive government that is always defending everything. It is time to stop defending and push out the good things being done by the government.

“Stop reacting. Come up with something good and the people will be glad to listen to you. This government is doing a lot that is not being communicated.

“Talking about insecurity, the military is doing great things that nobody is talking about.

“Just recently, we decided to start speaking out about some of these things.

“If the government concentrates on pushing out all these positive efforts at addressing the many problems facing the country, it will not have the time to be responding to frivolities and defending unnecessary things.”

The All Progressives Youth Forum (APYF) said: “It’s quite unfortunate that a well-respected religious leader like Bishop Kukah would choose the very period of rebirth and healing to speak of coup and war.

“And it is even more worrisome that the outspoken bishop was blowing hot air over an issue that has been addressed over and over again, with the Presidency even publishing the names of all appointees from all parts of Nigeria.

“While all men of God and of good conscience who have the patriotic mindset to seek the betterment of Nigeria have sent out messages of hope and unity during this Yuletide, it’s unfortunate that Bishop Kukah, despite being a stakeholder in the National Peace Committee, chose that very period to instigate one faith against another.

“The same Bishop Matthew Kukah, who at every major elections would traverse the country to request aspirants to sign up for peace during and after elections, was the promoter of the statement painting a President and leader of a secular nation as hater of Christians.”

Ex-ACF scribe Sani to Kukah: Do fact checks on your allegations

The immediate past Secretary-General of the Arewa Consultative Forum (ACF), Chief Anthony N.Z Sani, challenged Kukah to conduct fact checks on his allegations of nepotism and underperformance against the President.

Sani also asked the bishop to help Nigerians with a trend analysis of what he considers as the indices that should attract a coup.

He said: “I personally do not consider what Bishop Kukah has alleged serious. This is because military regime is out of fashion not only in Nigeria but globally.

“What is more, the advent of GSM makes planning and execution of coup almost impossible.

“On his allegation of Christians being marginalised by the regime of President Buhari, I do not have the facts.

“I have also heard of allegations of ‘fulanization’ and ‘northernization’ to the exclusion of the Middle Belt by some people, however defined.

“I would therefore appeal to such critics to do some fact checks in support of their allegations for the benefit of the public.

“This is because a declaratory accusation without evidence do not necessarily make it the reality.”

“So, while I share the view that the present regime should do more by ensuring balanced development and secure the nation, considering governance is an art of balancing competing demands among not only the constituents but also among socio-economic sectors, one cannot say this regime has not tried to improve over what obtained in the past.”

Nigerian Newspapers: 10 things you need to know this Wednesday morning